MY TOP 20 (PLUS TWO) CHRISTMAS SONGS

Everyone seems to have their top-10 holiday season songs (yes, you'll notice I've adopted the politically correct terminology for the season).    As much as I love the old standards, in a world where releasing a holiday album seems to have become a personal right, I've elected to go with an eclectic list showing my top 20 Holiday songs (plus three bonus selections).  Not intended as a slam on any of the standard top-10 picks, but you won't see John Lennon's ""Happy Christmas (War is Over)",  Wham's "Last Christmas", or David Bowie and Bing Crosby's 'Peace on Earth/The Little Drummer Boy" on the list.   Hopefully, what you'll see is a list that features lesser known, but no less enjoyable offerings.   Where possible, I've included a YouTube link allowing you to enjoy the actual tune.  By the way, the list is in alphabetical order by artist name.  And if I were asked, I'm not sure I could pick a favorite from the listing.

Postscript 12/7/2013 - I guess you can argue this isn't a true Christmas song, but I think it exhibits more of  the spirit of the season than most of the other songs on this list combined.  Anyhow, I stumbled on to an amazing story about a 17 year old named Zach Sobiech.   An aspiring musician, Sobiech died of cancer in May of this year, but before he died he wrote a song entitled "Clouds".  The song was intended as Sobiech's goodbye to his family and friends.   A local radio station had been playing Sobiech's song for the last year and as a charity fund raiser, the station decided to sponsor a large chorus to perform the song at the Mall of America.  Some 5,000 people showed up.   The results were simply stunning.   As a 54 year old I don't cry very often - probably the last time I cried was when my father died.   It was all I could do to not tear up after seeing this video clip.   Sobiech was clearly a special person ... 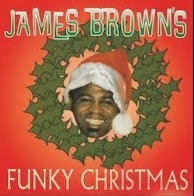 James Brown "Santa Claus Go Straight To the Ghetto"
One of the tunes on Brown's "Funky Christmas" album, this was classic James Brown with an able assist from Maceo Parker and his classic backing band.   I'll let the YouTube link do the talkin' 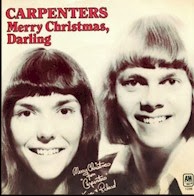 The Carpenters "Merry Christmas Darling" (1978)
Okay, you can accuse me of being lowbrow and totally caving to commercial pandering.   I'll readily admit my guilt - this is easily the sappiest song on the list.  The thing is I can remember taking
the train home from college for the holidays and while I was waiting to board the train in the midst of a nasty snow storm, this was one of the songs playing in the waiting room.   There was just something very comforting in hearing the late Karen Carpenter's sweet voice. 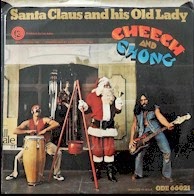 Cheech and Chong "Santa Claus and his Old Lady"
Christmas is not all about sentimentality.   There has to be a feel good dimension to it as well and who better than Cheech and Chong to introduce that facet to the season ?    I actually seem to remember hearing this one played on a local radio station.   With it's stoned revision of the Santa Claus story, there's no way that would ever happen today. 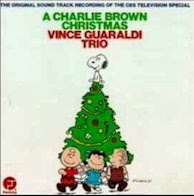 Vince Guardaldi  "Christmas Time Is Here" (1965)
Since 99.99% of Americans have seen the classic A Charlie Brown Christmas television show, I'm guessing that people would recognize this song from the opening chords ...   Instantly reminds me of Christmas.  Always wondered why this one doesn't show up on more top-10 lists. Donny Hathaway "This Christmas" (1970)
I guess it just struck me, the list as  lot of songs by folks who have passed on ...   guess that's a  nice reflection on the fact we need to enjoy and appreciate the limited time we have.   Hathaway actually released this as a 1970 single and it was included on his second studio album - 1971's "Donny Hathaway".   The song's been recorded dozens of times by everyone from punk band The Summer
Set, to Usher.   Hathaway's original remains the classic performance, though I've always wondered about the bizarre drums that keep popping up in the back of the mix.
http://www.youtube.com/watch?v=zWmOnfcI-CA 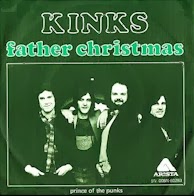 The Kinks " Father Christmas" (1977)
Ray Davies and the band were always at their best when  upset about something and in this instance their target was seemingly the brutalization of Christmas.   There was something endearing about the dark lyrics that portrayed Christmas through the eyes of a department store Santa confronted with kids asking for money instead of presents, or simply asking for help getting one of their parents a job.   Even more relevant now than in 1977 when it was initially released as a single.
http://www.youtube.com/watch?v=CjaPXihbORk 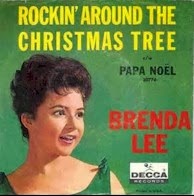 Brenda Lee "Rockin' Around The Christmas Tree"  (1958)
Okay, okay this is one that makes every top-10 list and it should.    The oldest tune on my list, it was originally released as a single back in 1958 (how many of you were even born in 1958?).   Lee was only 13 when she recorded the tune and as good as her performance was, Hank Garland's giddy guitar and Boots Randolph's sax are the icing on the musical cake.   Funny that many people know the song from the fact it was included in the original "Home Alone" film (1990). 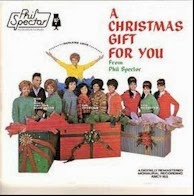 Darlene Love "Christmas (Baby Please Come Home)" 1963
So here's a true old-school  addition to the list (Love originally recorded the tune in 1963 as part of Phil Spector's "Christmas Gift for You" compilation album.   Spector originally planned on having Ronnie Spector and The Ronettes record the tune, but was unhappy with their version of the tune.  The tune was handed to Love and say what you will, her dynamite voice made this one of the most romantic Christmas tunes ever recorded.  Love's made a tradition of singing the tune on David Letterman's late night show.  While she does a killer live performance of the song, I'll stick with the original studio version with the classic Spector wall-of-sound production: 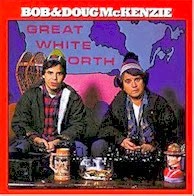 Bob and Doug McKenzie "12 Days of Christmas" (1981)
Did this really come out in 1981 ?   Starring Rick Moranis and Dave Thomas, SCTV's "Great White North" segment was consistently funny and at the time this was amazingly funny.   Admittedly it has lost a bit of appeal, but it is still funny. 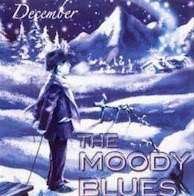 Moody Blues "In The Quiet of Christmas Morning" (2003)
This one came off the Moody's "December" album which technically wasn't a Christmas album.  For some reason I've come to really enjoy the entire album, but since this one basically appropriates a Bach melody, it's hard to go wrong. 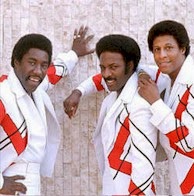 The O'Jay's "Christmas Ain't Christmas New Years Ain't New Years Without the One You Love
To my ears The O'Jays had a sound that was perfect for seasonal tunes and in spite of the hideous title (my college thesis was shorter), this is simply one of the best soul Christmas tunes out there. 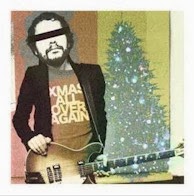 Tom Petty & the Heartbreakers  "Christmas All Over Again" (1982)
This one was initially included on 1992's  'A Very Special Christmas Volume 2'  Special Olympics charity album and his "Playback" boxed set.  Great jangle rock tune that sounded like a George Harrison and the Travelling Wilburys tune.  I included two YouTube links; one to the studio version and one to a 2000 live performance at the White House:
http://www.youtube.com/watch?v=1EzQu_7UzZk
http://www.youtube.com/watch?v=gaPj1GoDpQw 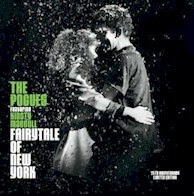 The Pogues "Fairytale of New York"
Has anyone written a classic Christmas song in the last thirty years ?    Yes.  The Pogues did with a song that's apparently about a guy spending Christmas Eve in a New York City drunk tank while thinking about a busted up love affair.  Certainly not everyone will agree with that statement, especially folks who aren't big fans of Shane MacGowan's totally out of tune vocals.   Course' the late Kirsty MacColl makes up for some of  MacGowan's shortcomings. 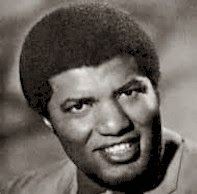 Sir Mack Rice - "Santa Claus Wants Some Lovin"
Seriously, you can't have a list without at least one Stax tune on it.   Picking one is a major chore, but this Sir Mack Rice tune is amazingly funky and will bring a smile to virtually everyone's face !!!    Why has America lost it's ability to write socially relevant commentary like this ? 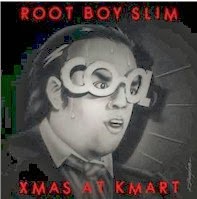 Root Boy Slim - "Christmas At K-Mart" (1978)
One of the memories that will haunt me until the end of my life is seeing Root Boy and the Sex Change Band doing a mid-'80s  Christmas concert at Radford University.  In addition to playing the usual Root Boy classics, as I recall, the man threw in some seasonal selections (including this tune).   Even though I was clueless at the time, there was lots of snow - including what appeared to be
a generous portion on Root Boy's face.   It's a near perfect Christmas tune for those of us in the lower socio-economic rankings. 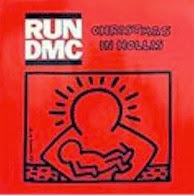 RUN-DMC "Christmas In Hollis"
I'm not a gigantic rap fan, but regardless of what you musical tastes are, this has to be considered a classic holiday tune.  Nothing more to say on this one. 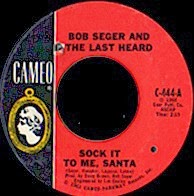 Bob Seger And The Last Heard, 'Sock It To Me Santa" (1966)
So this 1966 nugget was Seger before he became an FM-radio mega-star with the Silver Bullet Band.  As much as I loved the mega-star Seger, the garage rocker Seger was even better, though he was clearly channeling more than a little bit of James Brown. 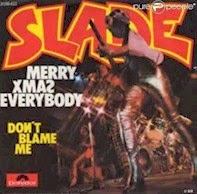 Slade "Merry Xmas Everybody" (1973)
Another tune that remains criminally unknown to most Americans, though it was a massive UK hit (# 1 for weeks in late 1973 and early
1974) ...  For a band that weren't known for being particularly subtle, that one was a major surprise, showcasing an attractive
working class vision of the holidays.  Noddy Holder's vocal chord shredding performance has to be heard. 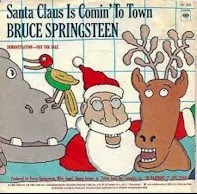 Bruce Springsteen "Santa Claus Is Coming To Town" (1985)
Another one that deservedly shows up on every top-10 list.  The version most folks are familiar with was recorded at a 1975 performance at a small Long Island college and initially appeared as the flip side to Springsteen's 1985  "My Hometown" 45.    What isn't there to love on this one ?  Springsteen sounded like he was having a blast (it's still part of his live catalog);  great sound effects, and Clarence Clemmons was the perfect Santa bellowing "ho ho ho's"
throughout.  Simply wonderful.  The video is from a 2007 performance in Paris - hysterical to hear the French audience singing the chorus in English. 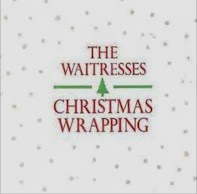 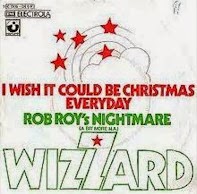 Roy Wood and Wizzard "I Wish It Could be Christmas Everyday" (1973)
I've always loved this tune; there's no denying it was highly mid-'70s commercial, but have long suspected Roy Wood's eccentric edges were simply too English for American audiences.   Roy Wood (white hair and beard) is prominently featured  in the promotional video (which is a major glam hoot). 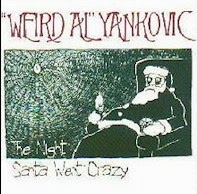 Weird Al' Yankovic 'The Night Santa Went Crazy'
Another tune that hasn't gotten the recognition it deserves; not that Yankovic is an unknown, rather it probably has something to do with the unsettling nature of his reworking of Soul Asylum's "Black Gold".   To say Yankovic gave the original tune a truly demented PG-13 lyric would be an understatement, though his performance  seemed to suite the less sentimental nature of the holiday season.  I'll let you judge for yourself. 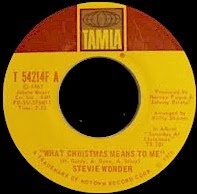 Stevie Wonder "What Christmas Means To Me" (1967)
Not sure why, but picking my favorite Motown holiday tune was a major pain.   To be honest, most of the Motown holiday product is pretty tame - lots of MOR efforts meant to appeal to middle class American stereo systems.   Luckily this 1967 Stevie Wonder original captured that magical Motown sound.   I think this Disneyland clip was recorded in 2009.  About all I can say it that it shows Wonder still has it after all these years.

Posted by BADCATRECORDS at 9:05 PM