WHAT A CLEVER BANK - BB&T

Thursday I went up to my local bank (the mega-institution BB&T) to deposit a couple of checks.  As usual, I filled in the deposit form, signed the checks, and stuffed them in the deposit envelop.

I guess I should have realized something was happening when I got to the bank and saw two people in line to use the ATM.  Both of them spent a couple of minutes at the machine before turning away with a look of sheer disgust and frustration on their faces.

My turn and I realize what's happened.  BB&T has changed their ATM machines.  I guess the concept was to make things easier for the customer, but they completely failed.   Interestingly the switch out  was done without any notice.  I can see why.  The new machines are worthless.  The human factors design in these things is non-existant and  I can see why people gave up in frustration.  It took me three shots at it to deposit a pair of checks and the system managed to mis-credit a three hundred dollar check to my account as an eight hundred dollar deposit.  Mind you, I don't mind them giving me an extra $500, but I doubt that's a good growth strategy for the bank.

Anyhow, the major change is that you no longer need to use the old fashioned deposit slips and envelops which I guess is a time saver for all involved.  Unfortunately the on-line guides are confusing and having the machine beep every couple of seconds is a major irritation.  Even trying to figure out which receipt you want is painful.  When the system "read" my check value wrong ($800 versus $300), there was no apparent way to fix the mistake.

Out of frustration I ended up going through the drive through window.  When I explained what had transpired, the ten year old bank clerk (looking like he'd just gotten to work after an all day rave), essentially indicated I was old and stupid for not knowing out to work their state-of-the-art ATM and there was nothing he could do about it.  Okay, you just credited and extra $500 to my account.  I'm fine with that.

I'd previously transferred my savings account to a different entity (go Navy Federal Credit Union) and this essentially pushed me within an inch of closing my BB&T checking account.  Excellent customer service there guys.  Ya should be quite proud.
Posted by BADCATRECORDS at 4:58 AM No comments: 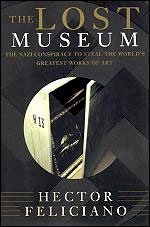 Title: The Lost Museum
Anyhow, I remember my mother telling me stories about the amazing art this family had on their walls - true impressionists; post-impressionists, etc. t's a story that's stuck with me throughout the years which is probably the reason I latched on to this book. No the book isn't perfect, kind of bouncing around between a 50,000 foot view of the German desire to pillage and more detailed material on individual collections that were co-opted. There's also an annoying "look how great my research" is segment at the end of the book. I would also have loved more information on what happened to the art. Clearly quite a bit of it was returned and there are brief segments that talk about works appearing at auction; works that were captured by the advancing Russian army, but what do folks think happened to the rest of it? My other complaint - I wish the few photos had been in color. Reproduced in black and white simply doesn't do them justice. Those criticisms aside I enjoyed the book quite a bit. Particularly interesting were the segments that delved into the history of some of the best known collections to have been confiscated. It must have been amazing to see homes literally choking on impressionist works.
Posted by BADCATRECORDS at 7:07 PM No comments:

Flew into Miami airport on the way to and back from St. Johns.  The flight back brought us in around dinner time and since it was next to the departure lounge we decided to grab a quick bite to eat at Nathans.  Poor choice on our part.

- Hideously expensive (even for airport food)
- Outright rude service - ordered hotdog for myself and a corndog for my kid.  Paid for it only to discover they had not included the corndog.  Even with the receipt in hand I had to argue to get the missing item which was grudgingly handed over as if it were a favor to me.
- Food was horrible.  Hotdog was old and stale.  Corndog was essentially raw inside.  Credit where due, the fries were okay.

Bottom line - stay away from this place.
Posted by BADCATRECORDS at 7:28 PM No comments:


My wife and I have been talking about buying a beach property since before we were even married.  We've always thought it would be the kind of inheritance that would be a wonderful thing to leave to our children.  That said, there's a gigantic gulf between talk and reality.  The fact that we live in Northern Virginia means "our" beaches out three hours east along the Delmarva - Rehobeth, Dewey Beach, Bethany, Ocean City.  Add to that the fact that mid-Atlantic ocean property was simply unaffordable throughout the late-'90s up until the mid-2000s didn't exactly help us implement the dream.  Even after the mid 2000a real estate meltdown, beach properties along the Delmarva seemed to remain high -  not that properties were selling, but people held on to the hope that the market would bounce back, or their property was special and not subject to the same market forces.

Anyhow, that longstanding interest in beach property is what captured by attention with respect to this book. 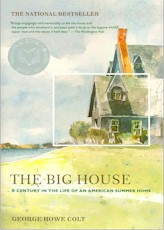 It took me awhile to get into this book because it is a highly personal tale, but once I did I simply couldn't put it down.  I actually finished it while on a 12:00 pm flight returning to Washington, D.C. from St. Johns, Virgin Islands (everyone else around me was asleep, or watching what may be the worst sitcom ever to see the airwaves something called Men with Babies ?).  Anyhow, the book basically traces the history of a large Buzzards Bay, Massachusetts vacation home and the stories of the extended Boston family that built the home and lived in it throughout almost 100 years (the family sells the place in 1992). The home's history is fascinating, but so are the ups and downs of the extended family that owned the home.  The book gives you a wonderful feeling and insight into a family with more than its share of tragedies and darkness.  I guess because I see some similarities with my own extended family, it was one of those rare books that I simply couldn't put down.   Hopefully this generation of Colts and their children find the peace that their predecessors did not.

Didn't bring me any closer to a piece of the Delmarva, but I enjoyed every minute of the book.

Posted by BADCATRECORDS at 7:13 PM No comments: