I don't identify with any particular political party, rather vote on the issues as I see them.  That means I tend to be pretty conservative with respect to fiscal issues and a little more liberal with respect to other issues impacting day-to-day lifestyle choices.

So what's that got to do with my interests in music?  Well, I saw this little blurb in the news.

"Don’t ask why. Just know that evil, dishonesty, and scam artists have always been around and that right now they’re liberal, they’re Democrat, they’re RINOs, they’re Hollywood, they’re fake news, they’re media, they’re academia, and they’re half of our government, at least.  So come to that realization. There are rabid coyotes running around. You don’t wait till you see one to go get your gun. Keep your gun handy, and every time you see one, you shoot one.”

Ted Nugent in an interview with Media Matters

I've actually been a longtime fan of Nugent the musician.  I have a bunch of his albums going all the way back to his Amboy Dukes days. As a teenager I found his brand of independence kind of entertaining and will admit I spent way too much time listening to the live LP, but when anyone suggests killing a fellow American; particularly because you don't happen to agree with their political outlook ...  Yeah, that's a real problem.  Hopefully Nugent was just trying to be humorous, but that statement isn't funny.  It's about as funny as pointing out Nugent has taken pride in telling the media he was a draft dodger during the Vietnam war.  I won't even bother going into the story of how a then 30 year old Nugent reportedly adopted a 17 year old girl so he could live with her (no, the relationship was not your typical father-daughter set-up, not did the relationship last).  And this man is a representative of the National Rifle Association?   Seriously, the NRA wants someone like the Nugent representing them?  Out of the 300+ million Americans, he's their choice?  They seriously condone a message like this?

Well, what about free speech ...  You can't yell "fire" in a movie theater.  You can't piss on your neighbor's door.  So why should he be allowed to condemn roughly half of all Americans?


So I was going to sell my Nugent record collection at a bargain price and then donate the few dollars I received to some local Mothers Against Violence coalition.  Instead I decided to simply pitch the albums in the trash (see below) and I'll make the donation out of my own pocket. 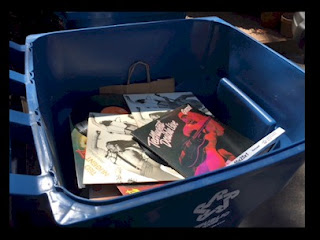 Posted by BADCATRECORDS at 9:43 AM